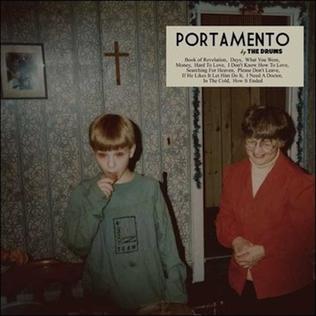 The Drums made their debut a couple of years ago, churning out short, catchy surf-inspired pop songs, and on their new albumÂ Portamento, they haven’t strayed too far from the formula.

The songs on their second full length album are generally simple, for better and worse. Opener “Book of Revelation” is mostly bass, hand claps, and the singer’s somewhat nasally voice. It picks up during the chorus, when the singer actually sings “Well I believe that when we die, we die”. A little dark, but the music is upbeat enough that you won’t realize it until the song is over.

“Days” is one of the album highlights, with smooth harmonies of “As days go by, I never needed you” adding strengths to laments about killing one’s self. Musically, it’s also a sparse track, though the addition of an acoustic guitar halfway through and an echo effect on the vocals adds some necessary lushness.

“What You Were” is a bouncier number, with some added whizzes and reverb, and warmer vocals. “Money” goes in the opposite direction, with annoyingly flamboyant vocals, and whines of “I’d like to buy you something, but I don’t have any money”. A plight we can all relate to, but the singer’s voice is too off-putting to pull the joke off. “I Don’t Know How to Love” sounds like a lost 80’s track that could have been on the soundtrack of a John Hughes movie.

The 80’s vibe continues on the synth-heavy “Searching for Heaven”, which unfortunately also continues the high-pitched, whiny vocals. The 60’s style guitars return on “Please Don’t Leave”, but the vocals continue to be grating. “In the Cold” brightens the end of the album, with some actual emotion coming through, but it’s too little, too late.

Portamento is up and down, with the singing often making or breaking a song, and usually doing the latter.