While we are always on the lookout for the best new tunes here at the Indy Review, with an attempt to favor smaller, lesser-known acts, sometimes you want to just go back to some old favorites (or old songs which could become new favorites).

I never hide my unabashed love for 90’s alt rock, including many of the bands who are absolutely maligned today. One of those bands who hover between hated and ironically loved are Smash Mouth. After obtaining minor success with 1997’s “Walkin’ on the Sun”, Smash Mouth had their first major smash with the inescapable “All Star”, which you know you can still sing every word to today.

With every meteoric rise comes the backlash, and man did Smash Mouth get backlash. And I’m not here today to say they are actually a great band and that their catalog deserves a full re-evaluation. They don’t have the musicality of Matchbox Twenty or the lyrical cleverness of Third Eye Blind. They are a band perfect for county fairs mall openings.

But I will say that their single “Pacific Coast Party” from their 2001 self-titled album deserves a listen, since most of you had likely written off ever listening to Smash Mouth again following the onslaught of “All Star”.

Beginning with a 60’s cinematic string arrangement, the song is an effervescent, summer beach party blast that deserves a home on BBQ and pool day playlists everywhere. There is no bro-down heaviness or over-reach for artistic cred – just sunny guitars and a breezy delivery of lyrics asking you to forget your troubles and “join the celebration”.

And as the current state of our country and world gives us few reasons to actually celebrate, sometimes an escapist tune can do wonders for the soul. 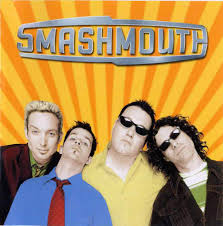