Flutists in the US generally don’t receive too much respect, and have had little impact on pop culture, aside from Ron Burgundy’s jazz flute breakdowns. In Japan though, Goro Yamaguchi, a Japanese shakuhachi (vertical bamboo flute) player, was deemed a national treasure.

Passing away in 1999, Goro managed to leave an impressive impact not just on Japan, but on the world (and potentially one day, other worlds). In 1967-68 he was appointed Artist in Residence at Wesleyan University in Middletown, Connecticut, where he recorded his A Bell Ringing In The Empty Sky LP. One honkyoku from that LP, “Tsuru No Sugomori” (Nesting of Cranes), was included by NASA on the Voyager Golden Record which was sent into space.

A couple other songs by Goro, “Kushimoto-Bushi” and “Moon Over the Desolate Castle” are available on Spotify, and I highly recommend listening to them if you need to chill out or cleanse your pallet from popular music for a minute. 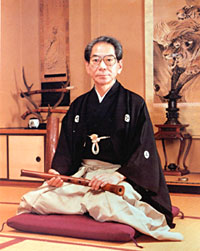