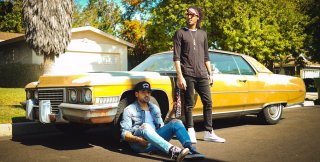 Song: Raised in the Wild

Blending various genres, new duo 1 AMVRKA (pronounced “One America”) are not only unifying a number of musical scenes, but attempting to do so through their lyrics as well. While newer single “American Muscle” is a more patriotic rallying cry, the first song released from their upcoming debut EP, “Raised in the Wild”, unifies through its story of struggles. A family crowded into a small home finds their hard lives becoming harder after the father is killed in an overseas war, and later the narrator laments the loss of a number of friends he grew up with due to gang violence. A mellow drum beat and acoustic guitars accompany the rapped verses, leading to an anthemic chorus that would have fans of rap, rock or country raising their hands.

The duo are native to Los Angeles, and have been playing shows around the city over the last year. Check out their website for the latest updates and news on the release of their upcoming EP.