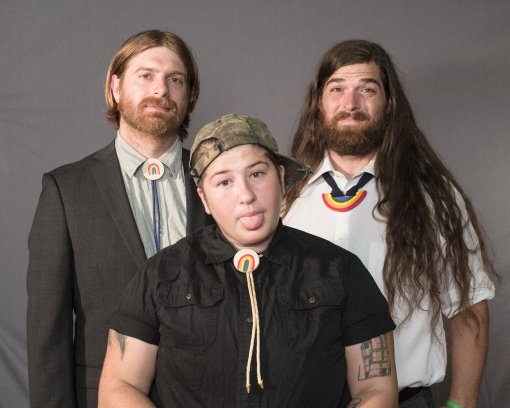 Thin Lips are a Philadelphia indie rock band distinguished by carefully crafted rhythm so playful yet artful with vocals and lyrics that are world weary yet optimistic. Their second LP Chosen Family is to be released on July 27th.

They’ve released two singes from it that just might suck you into an infectious rock band with a decade of intimate music making behind them (two siblings and a best buddy comprise the three piece): “Gaslight Anthem (The Song Not The Band)” and “A Song For Those Who Miss You All The Time”.

The backstory of the second has the history that’ll make a poppy rock song get the goosebumps going. The lead singer/guitarist, Chrissy Tashijan, and her brother, Mikey Tashijan (rhythm), lost a younger brother years ago and the song speaks to the longing left from the loss but with maturity and understanding showing the emptiness has or is being processed. The subject matter juxtaposed with the tight, melding of rhythm (courtesy of Mikey and third member. Kyle Pulley) and lyrics make the song infectious with some staying power.

“Gaslight Anthem (The Song Not The Band)” on the other hand deals with heartbreak and has, again, their complex rhythms emerging not afraid to feature a voice, a guitar or a drum, even adding some well placed synths.

I don’t know what kind of commercial success this band will ever reach but do yourself a favor and support their great music.  It really is some lesser known impassioned indie rock.

Thin Lips is currently touring with Hop Along all around the US.