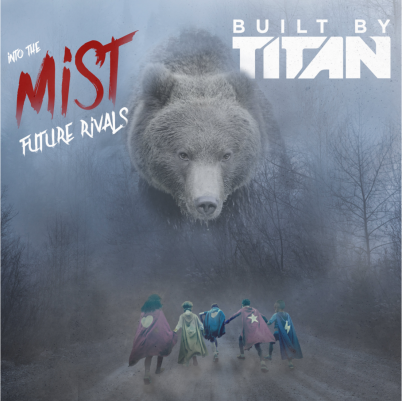 Song: Into the Mist

I can’t stress enough the importance of good cover art, whether for an album or a single. It is integral to developing a band or artist’s identity, brand and story. It can also help lure in curious listeners, as they browse the new release section on Spotify or Apple Music.

It’s the cover art which led me to add Built by Titan‘s latest single, “Into the Mist” featuring Future Rivals, to my weekly playlist of new music. I had no idea what to expect from it, not being familiar with either artist, but the art, showing a group of young super heroes journeying into a fog-drenched forest, while a giant grizzly stares down at them, sparked my imagination. There’s not much written about BbT online, so the world he’s creating through his cover art becomes the story of the artist.

Whatever mythology Built by Titan is trying to build, it wouldn’t matter if the music wasn’t good. Thankfully this isn’t the case. “Into the Mist” is an upbeat electronic blast with pop rock vocals that will remind listeners of The Killers. It’s not what I would expect based on the cover, but very enjoyable all the same.

Check it out below: