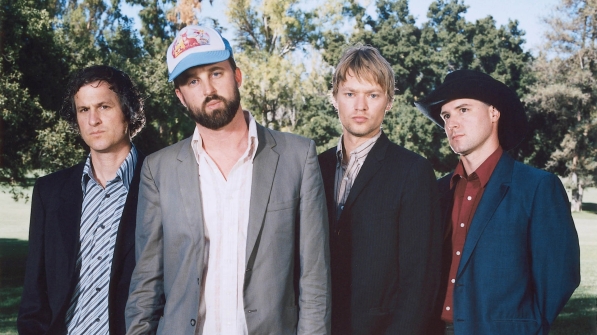 Cake are one of those odd groups from the 90’s who racked up a string of hits, yet due to singer John McCrea’s unique monotone speak/sing style vocals, and their knack for writing songs about race car drivers and women with short skirts and long jackets, they’ve maintained the aura of a novelty band despite the true versatility of their musicianship and songwriting.

After a long break, the group have released their first new song in seven years, “Sinking Ship”. A surprisingly heavy affair, the track opens with a stomp-along guitar line, with McCrea coming in with ominous lyrics with a not-so-subtle political overtone (“And if your people are the best, tell me why you’re wearing that vest? This investigation into disinformation keeps putting everyone to the test”). An Arabic scale guitar solo kicks in, and the group’s prominent horns come forward, and you know this song could only be written by this eclectic band.

Welcome back Cake. Hope you stay a while.