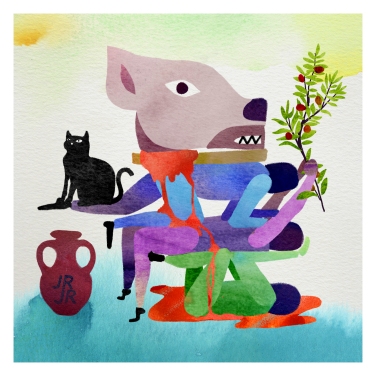 From 0-3 in the span of 10 months. That was how one half of the duo that is JR JR’s family grew. Daniel Zott was able to adopt 2 children he and his wife had fostered and then they were told that she was unexpectedly pregnant. This was one part contributing to the delay since the band’s 2015 full-length release.

Not just a new family but a quest to get right mentally for Joshua Epstein, the bands other founder, added to the delay. This and that came along with their band’s war with Warner to end their contract with the major label. Now, with those battles fueling creativity, the indie-pop band is set to release a double album, Invocations and Conversations. They are sitting on something stellar in an age when singles and attention deprivation are all the rage. I’ve heard both and can attest that this stuff is indie gold. It’s water cooler shit.

The first two singles “NYC” and “Day In, Day Out” and soon to be released “Low” and “Big Bear Mountain” give just a nibble of what’s likely to be a critical and fan favorite of the year.

Their sound brings to mind Vampire Weekend. It holds that same sense of exploration, freedom and joy in the discovery of unique sounds that build each song. Their music is a pure joy. Vocals tend to soar with echo over mixes of electronic sounds and classic pop rhythms. These songs give rise to welcome goose bumps. You can hear a bit of the quest to be free from a major label’s constraints in the variety. Just on the four singles “Day In, Day Out” and “NYC” are toe tapping grooves that will make you bob your way down the street. On the other hand, “Big Bear Mountain” approaches a folk/Americana sound led by a smooth piano.

We’ll review this monster upon its release at the end of May but do yourself a big favor and follow them now. JR JR are free of the big label shackles and on their own, Love is EZ Records. This seems to be a new chapter in an indie story that we can all hope ends in happily ever after for a family, a band, and a wish to control what they create.