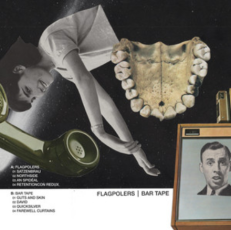 There’s a certain style of punk rock that feels both timeless and nostalgic. It’s rough, rousing, noisy and melodic, and Bar Tape seem to have it oozing from their pores. Formed by four American guys (three of whom met in school in Wexford and bonded over a love of skate punk) in Dublin, Ireland, the band first formed in spring of 2018, and by early 2019, had a two song demo released and started playing gigs. Earlier in November, they released their debut EP as a split with Canadian band Flagpolers.

The thunderous opening of “Guts and Skin” pummels listeners with tight riffs while keeping them held up by the shout-along gang vocals. It’s a quick and strong musical punch to the temple, and perfect for getting you in the mosh pit mood “David” demands, with its distorted and loud guitars and memorable chorus (“We’re gonna rock the boat. Rock it till I choke.”)

The vocals tend to get buried under the explosive drums and guitars on the tracks, and while it doesn’t prevent tracks like “Quicksilver” from being catchy as heck, I hope they group grows confident enough in future recordings to place the vocals on equal footing, if just to allow the lyrics to ring clearer. It works pretty damn well for them on “Farewell Curtains”, the closing fast and furious anthem on the EP which is easily the stand-out track (and the one where the vocals are most easily pushed forward).