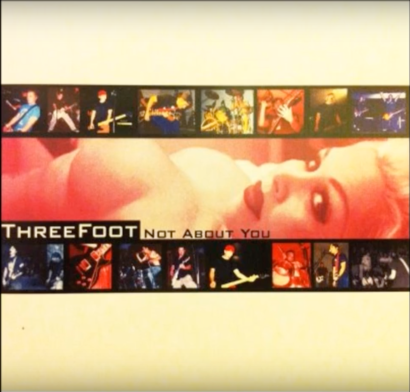 I am back again to rediscover some excellent forgotten tracks of yesteryear, and today I’m focusing on another pop punk gem from the early 00’s, “So Wrong, So Long” by ThreeFoot.

This is another one that I found back when music blogs and mp3 sites were nascent and booming, and from the slick, opening guitar line and the anthemic drums, this track has stuck in my brain over the decades. When I went searching for more information online about the band, there was little to find. LUCKILY, I happened across a Youtube comment that pointed out that the band’s guitarist, Will Castro, was now in the punk band Western Settings (writers of one of our previous Bangers of the Week). He was kind enough to answer a few questions about his old band:

IR: What was the origin of the band?

WC: We originally formed in 1999 in San Diego.  Zach Foco on vocals, Will Castro on guitar, Danny Shore on bass and Eric Zlukasic on drums. All of us were in other smaller projects.

IR: Following the recording of Not About You, can you tell me a bit about where you toured and any groups you toured with?

WC: Unfortunately we never toured.  After having played over 300 local shows the band was at odds with itself by the time we released Not About You.

IR: Were you signed to a label?

WC: Self-released on Betray Records, our own label.

IR: What led to the band’s dissolution?

WC: Zach Foco, the frontman, moved to Arizona for school and eventually landed in Rome working for the UN.

Will described the song as a “typical love/loss song”, stating it wasn’t about anything specific. Either way, it’s certain left a mark with me.

The singer had a perfect voice for the genre – sugary and youthful without the nasal whine of so many of his brethren, and the song is full of wistful lyrical arrows that struck me hard: “Did you think all this through? I thought about it too, but I can’t waste my life away on a love that isn’t true.” For this genre at the time, it was rare to find lyrics invoking strength in the face of heartbreak – a narrator willing to move on instead of spending his time pining over someone who couldn’t reciprocate. For college-me, that hit home. And of course, the track is catchy as hell.

Like so many of the other lost pop punk songs we’ve focused on here in Lost Gems, the band and their album Not About You don’t have any official releases on DSPs. In our interview, Will mentioned there was a bandcamp link somewhere, but I was unable to find it, so unsanctioned YouTube uploads are the only way to hear ThreeFoot‘s music currently.

Take a listen to “So Wrong, So Long” below: