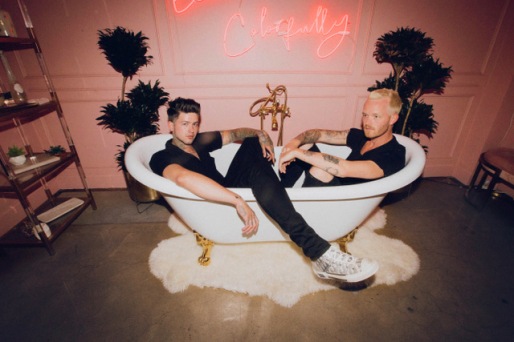 Girlfriends founders Travis Mills and Nick Gross each have their own unique artistic resumes working in different realms of media. What’s clear is that whatever influential experiences their backgrounds have given them is helping them in a big way, as their debut single “California” knocks it out of the park.

Pop punk with a modern indie edge and emo rap influences, “California” covers some dark terrain. Produced by John Feldman (frontman of Goldfinger, and producer of recent releases by blink-182 and The Used), Mills says of this tribute to where he and Gross grew up:

“I have seen LA eat and spit people out and I’ve seen it make some incredible things happen. There is such a duality to this amazing place,”

It’s a sentiment I can truly understand, also having spent the majority of my life in Los Angeles. Lyrics like “California, looks good on ya, but it made a mess of me” covers the ground of how the culture of this city can pull people in different directions. That the song can relay this message in such a catchy, rocking fashion gives hope that girlfriends have a lot of good music in store for us in the future.

Hear the track in our Check This 2020 playlist, as well as our Next Wave Alternative playlist!