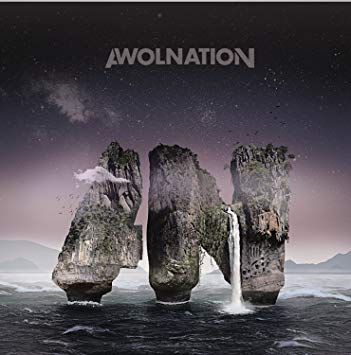 AWOLNATION‘s Aaron Bruno did time in two other up-and-coming bands (Under the Influence of Giants, Hometown Hero) before finally finding success with this new project. The past experience has paid off, as Megalithic Symphony is a masterful mashing of styles, combining electronic and organic musicianship with soulful, rough and melodic vocals.
Lead single “Sail” is one of the darker numbers, with a sparse, base-heavy electronic marching rhythm crawling slowly as Bruno shouts out “blame it on my ADD”, like a soulful Trent Reznor. “Burn it Down” comes across like an industrialized Little Richard, with sludgy synth, fiery guitar strumming and hyperactive drumming. The album is not all heavy though. “Jump on My Shoulders” is a party anthem that could play equally well in a club or a stadium.
“Guilty Filthy Soul” rides hand claps and a plucking piano to a jaunty chorus. “Wake Up” goes from rap verses to a sunny, Maroon 5-ish chorus that could be the crossover hit AWOLNATION needs to break out of the Alt Rock box.
For some, the ADD nature of the album, with its great stylistic shifts may be a downside. They may also find the ending, 14 minute “Knights of Shame” trying. All the same, Bruno seems to have finally found the right project for himself. Here’s hoping he sticks with it.
Listen to the album here.