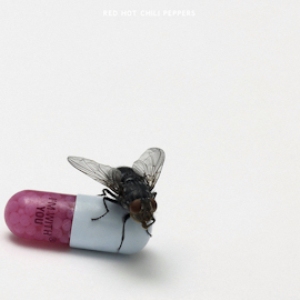 There are two types of Red Hot Chili Pepper fans – those who love their earlier albums like BLOOD SUGAR SEX MAGIK, and those like me, who love CALIFORNICATION and all the music that has come after it. I’M WITH YOU, their new album, and first with new guitarist Josh Klinghoffer, takes a few notes from their early hard-funk work, but is mostly a continuation of the musical direction the Peppers have been going in since 1999.

I’M WITH YOU is probably one of the Peppers’ most musically diverse albums. Part of this expansion of sound may come from the loss of guitar virtuoso John Frusciante, whose beautiful solos and backing vocals were stand-outs on previous Peppers albums. Klinghoffer is perfectly capable of fitting into the unit, but his presence is not as dominating as Frusciante’s was, allowing for the new elements in these songs to shine. The inclusion of synthy, disco strutting (“Monarchy of Roses”), jangly piano (“Happiness Loves Company”) and jazz trumpet (“Did I Let You Know”) takes the Peppers’ sound in refreshing new directions. There are still throwbacks – funky “Factory of Faith” and “Annie Wants a Baby”, but these are some of the least interesting songs on the album.

The Peppers also explore new emotional territory, including one of their saddest songs to date, “Brendan’s Death Song”, inspired by the death of their long time friend, supporter, and Los Angeles punk icon Brendan Mullen. As Anthony Kiedis sings “Like I said, you know I’m almost dead, you know I’m almost gone”, the mournful quality in Kiedis’ voice shows how far he’s come as a singer since the shout-rapping of “Give it Away”. The Peppers balance this sadness with more joyful numbers, like the previously mentioned “Happiness Loves Company”, which Elton John would be happy to have in his catalogue.

Another stand-out is “Police Station”, which incorporates Flea’s new piano-playing skill (much of the pre-release hype for the album focused on Flea’s time spent learning musical theory at USC) and quiet acoustic guitars as Kiedis recounts numerous encounters with a woman from his past. The soaring chorus carries the song to a melancholy piano solo at the bridge, before returning to Kiedis reminiscing in a Bowie-esque groove (lyrics “Dreaming of the golden years” seems like a direct Bowie reference). Then again, trying to analyze Chili Pepper lyrics can be a near-impossible task (“Tug boat Sheila is into memorabilia”?), so it’s often best to take your own meaning from these songs. Kiedis has shown signs of becoming the Springsteen of the Sunset Strip, filling his songs with various characters (Rain Dance Maggie, Dani California), but his storytelling is more of a collage than a linear narrative.

While I’M WITH YOU will likely not be remembered as one of the Peppers’ best albums, it proves that no matter what changes the group goes through, they will always be able to overcome and put out music no true fan of theirs will be disappointed in.