As part of the monthly Chinatown Summer Nights festival, LA Weekly hosted a stage for local bands. The putrid humidity and intense heat of the day had kept me (and sadly most people) away from the earlier acts, and the night was only just beginning to cool off as The Americans came on stage. And despite the bad weather, the group consisting of Jake Faulkner, Zac Sokolow, and friend to the site Patrick Ferris still pummeled out an energetic set highlighting tracks from their upcoming album (I’ll Be Yours, 10/20/17). From the gentle finger-picking on the title track, to the stomp and holler of “Stowaway”, the group showed off their impressive range. Making a slight nod to our political times, they ended their set with a cover of the old time standard “Tell Me Why You Like Roosevelt”.

The sun set during The Americans‘ set, so Elle Belle was able to come out to a cooler, dark landscape, which suited their style of psychedelic rock perfectly. Their opening two songs sounded like deep cuts from a compilation of 70’s acid rock, but when they went into “Sweet Crimes”, their hook-writing skills emerged from the psychedelic swamp. Highlight “Knock on the Light” revealed a knack for Weezer-esque power pop that would be perfectly at home on modern rock radio. 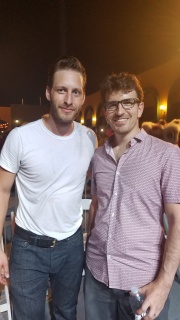 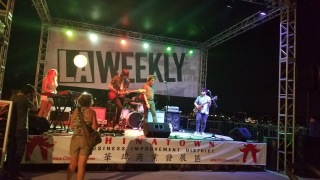 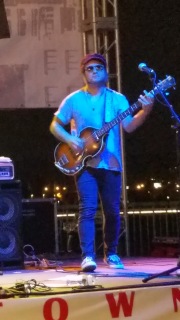