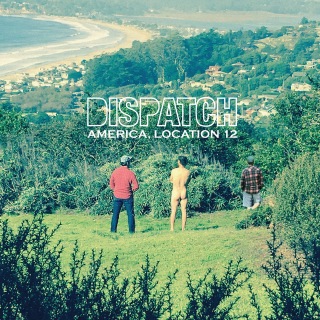 When word got out that Dispatch would be going on hiatus back in 2002, it drove enough fans to their final shows at Madison Square Garden to sell out the venue – the first independent band to ever do so at that time. The group’s hiatus lasted for a decade, while the band members worked on their own projects.

The group reunited in 2011, and America, Location 12 [June 2017, Bomber Records] is their second full-length album of new material to be released since then, and it’s one of their strongest overall albums to date.

The opening “Be Gone” vacillates between hymn-like verses and a ripping acoustic guitar breakdown. The bridge is equally dynamic, with fiery solos culminating in a breezy, choral vocal arrangement that is beautifully wistful. Single “Only the Wild Ones” is a nostalgic anthem for free-living youths. As you listen to “Only the wild ones are the ones you can never catch…no place to go but everywhere”, you’ll be dreaming of laying by a campfire under a starry night sky.

“Curse + Crush” is a folksier number hitting at the plight of humanity’s struggles, “We fight and we fuck and we make-up, and we love and we shove it aside.” Dispatch have never shied away from socially conscious or political lyrics, though with all the ground to cover in our current climate, they seem more interested in addressing broader themes on this album instead of honing in on specific issues.

Album highlight “Painted Yellow Lines” is another nostalgic number, reminiscing about a summer fling and adolescent hi-jinks. The steady, mid-tempo melody chugs along pleasantly, with one of the group’s bounciest choruses, until ending elegantly with the heartbreaking acceptance of “…I have no expectation, just to be here in the present, and behold you for a second, before it all goes away.”

Though America, Location 12 is on the whole a lighter, breezier album than past works, the group still proves it can explore darker terrain on the hard-hitting “Skin the Rabbit”. Running over a tribal beat with a nearly-metal guitar churn, it also provides one of the album’s catchiest choruses. The tribal rhythms continue on “Midnight Lorry”, with bluesy verses and finger-picked guitar lines that sound like leftovers from a Vieux Farka Toure track. The chorus is a sing-along country shuffle continuing the lyrical themes that pop up throughout the album of rambling and drifting through the country and life.

“Rice Water” gets back to the political leanings, touching upon America’s love of guns, wars and walls in a punk-lite wail. Closer “Atticus Cobain” is mashes melancholy verses with a danceable bar chant and some of the album’s few electric guitar riffs.

For Dispatch‘s older fans, they may miss the reggae or hard-rock elements that populated much of their earlier work, and on the whole the album trails along a bit too evenly. A loud banger could have been a welcoming jolt to break up the mellow vibe that permeates most of America, Location 12, or at least another speedier cut like “Skin the Rabbit”. Still, America, Location 12 proves to be a more solid and enjoyable collection of songs than the group’s previous releases this decade.