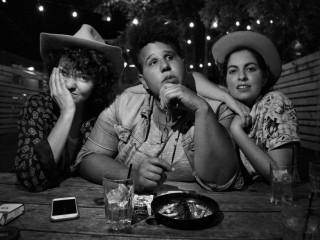 Lead singer of The Alabama Shakes Brittany Howard has proven herself to be a musical force to be reckoned with, capable of belting out soul rock with the Shakes, punk rock with side project Thunderbitch, and with her new trio Bermuda Triangle, featuring Nashville songwriters Becca Mancari and Jesse Lafser, beautifully harmonized country music.

Having already played one show, the group has now released their first piece of studio music, “Rosie”. It’s a stunning ballad with finger-picked guitars and impeccable three-piece harmonies from the three talented women. As they sing “Rosie, lay your weary head…”, you’re going to want to lay back and soak in this song.