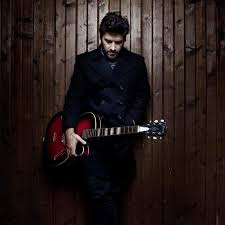 Bob Schneider is one of the rare songwriters who can imbue his work with humor just as easily as he can sincerity. Hailing from Austin, TX, Schneider has had a nearly thirty year career in music. Beginning as the lead singer of band Ugly Americans, Schneider has most recently been writing and recording as a solo performer, and just released his seventh studio album, Blood and Bones.

While his latest collection has plenty of whimsical moments (“Making it Up”), the beautiful title track is the stand-out, managing to create a meditative essence while meshing Schneider’s knack for droll lyrics with gems of honest vulnerability. Schneider sings “I wish I was a bird. I could build a nest in your hair…”, a comical image, which he then masterfully tempers with “And I could sing you to sleep every night and everywhere.”

Schneider’s lyrics are like a pillow softening the impact of the emotional bricks he’s throwing on this album. It may take a few listens to take it all in, but it’s worth your time.