Pasadena’s new annual 2-day festival is one of the best music line-ups around for those who feel Coachella has gone too pop. Taking place outside of the Rose Bowl, the Arroyo Seco Weekend 2018 contained a great line-up, craft foods, and a whole lotta dust.

For cost reasons, I could only do one day, and chose Day 2 because of the headlining combo of Robert Plant and Kings of Leon, neither of whom I had seen yet. I arrived early to get the lay of the land. The festival grounds are split in half by an empty river basin, and for some reason this year they swapped thing around, moving the main stages to the east side while keeping the smaller Willow stage on the west side. This made the walk between main stages longer, which made it a greater challenge to catch the full shows of each act if you’re alternating stages (there was no buffer time between headliners).

Trampled by Turtles – I began the day with these bluegrass stalwarts. Lining up on stage in a democratic line-up, and forgoing drums all together, the group created a higher energy romp with its numerous stringed instruments. Highlight was “Codeine”, the first song of the group I ever heard, though the tracks from their latest album Life is Good on the Open Road came across great live.

Violent Femmes – This was my second time seeing the Femmes, having previously caught them at Coachella some years before. They remain a very solid live show, knowing which tracks of theirs are crowd pleasers (“Blister in the Sun”, “Kiss Off”), but thankfully weren’t afraid to throw in one of their newer tracks (“Memory”) and get into some musical weirdness. Despite having the entire stage, the three piece stayed closely huddled together, though had help from a saxophonist on a few tracks.

The Bangles – I’m not very familiar with the Bangles’ catalogue, only knowing “Hazy Shade of Winter” off the top of my head, which the group were finishing as I arrived. The four ladies hit the right notes for their crowd, playing hits like “Manic Monday” and “Walk Like an Egyptian”, and digging out material from their earliest albums. I was a bit distracted during this set, having run into a friend in the audience, but I left the set with admirable feelings for the band.

Alanis Morissette – It was easy to see there was a lot of excitement for Alanis’ return, just based on the huge crowd assembled in front of her stage. I took a seat at a distance to watch the set, only able to set it off the screens. The first things to notice is, despite Alanis ruling the airwaves of rock and pop radio in the 90’s, she most definitely is a rock star. Playing guitar and harmonica, she owned her stage as she broke out her huge array of hits. Maybe because she was aware of the back-to-back line-up, Alanis broke out some of her biggest songs early in the set, giving fans “Head Over Heels”, “Hand in My Pocket”, and “Ironic” while the set was still young. She closed with “You Oughta Know”, leaving the audience satisfied.

Gary Clark Jr. – The man remains one of the few modern guitar gods. While his songwriting doesn’t quite live up to his musicianship, the new song he premiered showed he’s getting a better handle on memorable rock songwriting. Otherwise, he’s still a blast to watch when he gets into solo mode.

Robert Plant – The man’s a legend, hands down, and drawing the biggest crowd of the day, it was clear the whole fest knew it. While I’m sure most would have preferred to see a Zeppelin reunion, Plant thankfully did not deny the fans songs from his old band’s catalogue. “Going to California” of course drew huge love, as did “Babe I’m Gonna Leave You”. I also personally loved hearing his 2014 single “Rainbow”, which is more proof that the guy is still a strong and relevant songwriter. Very happy I got to see this performance.

Third Eye Blind – A completely different vibe than Plant, but just as enjoyable. 3EB is a band I’ve been listening to for decades, so when they hit the stage with the amazing “Graduate”, I couldn’t help lose my s**t a bit. Frontman Stephen Jenkins has a great handle on crowd interaction. Admitting that they were only really playing the fest for fun (and to take a break from recording new music), they inserted a number of recent songs (“Company of Strangers”) with the singalong hits (“Jumper”, “Never Let You Go”). He also surprised the crowd by bringing out a 16 year old ingenue named Lilly who sang on their upcoming covers EP, and wowed the crowd by taking over lead vocals on “Motorcycle Drive By”. This is one of those bands I could see any time and enjoy myself immensely.

Kings of Leon – The final act of the night had a lot of pressure riding on them, and for the first few songs, it seems like they were feeling the pressure. Frontman Caleb Followill was a bit stiff and unengaging, especially in comparison to the very loose Stephen Jenkins. Maybe it was the rest of the group’s energy and happy spirits while playing, but Caleb eventually started to show some charisma verve to help make the songs pop. The Kings’ rhythm section deserves a ton of credit for adding a strong dose of boogey to their rock and roll hits. The group writes perfect stadium songs (“Walls” gradual build took the crowd by storm), but seem like they are still getting used to playing such large stages, despite their success. They closed with breakout hit “Sex on Fire”, a rocking rave up that helped the crowd burned off the last of their energy before heading back to their cars.

And now, for the fest itself:

The Good – There’s a great array of food to choose from, even though all of it is ungodly expensive ($10 for a scoop of ice cream???). If you’re Vegan, you would not go hungry here. Thankfully, the Bai booth was back again with free drink give aways, and there were water refill stations, so no one would go thirsty. There were also cool sight exhibits like the NASA dome, and a Focus on Flowers exhibit. The fest is good about letting people bring in chairs and blankets, but also wisely marked off the sitting/camp out areas around the stages so those folks who wanted to be up close didn’t have to fight there way through the campers. Getting into the fest and parking wasn’t hard, and there were a number of maps around the fest to find your way around.

The Bad – The walk from the parking to the entrance was a long journey and signage was poor. As mentioned, the food is crazy expensive, even by festival standards. On the Oak stage, the vocal sound seemed too low, hurting the bands’ performances. While hard to enforce, the fest should really consider a dedicated smokers area, so those in the crowd don’t have to be subject to cigarette smoke blowing into their face while they try to enjoy the music. Getting out of the fest was a gigantic, disorganized clusterfuck, with only a few employees swinging around sticks with little care for what good it did. It took nearly 30 minutes to get out of the parking area, with long periods of no movement. 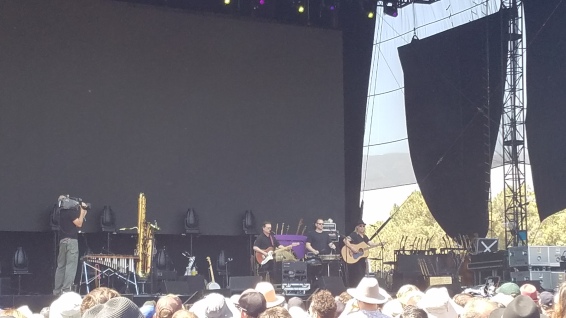 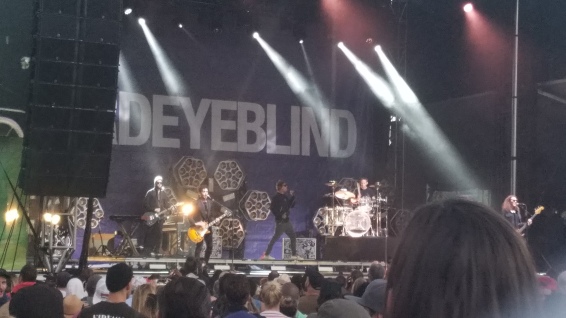