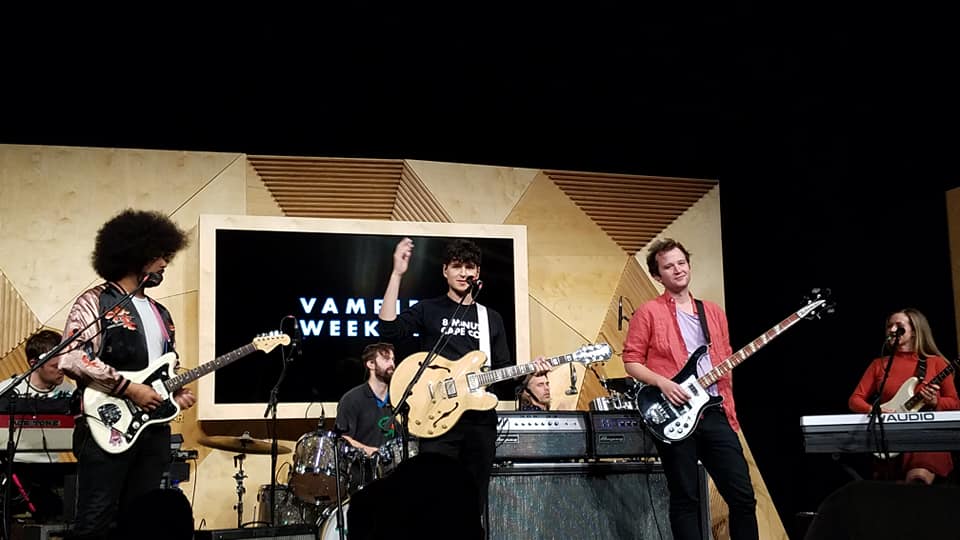 GQ Magazine have been doing a series of events as part of their Men of the Year 2018 promotion, and Saturday, December 8th, they hosted an interview with Ezra Koenig, frontman for Vampire Weekend at the Neuehouse Hollywood. While only an interview was advertised, upon seeing a full band set-up on stage, it was clear some music would be played that evening.

The first questions of the interview were primarily about the upcoming 4th LP, of which Koenig would only say it was coming “soon”, and side-stepped more specific questions. He then went further into discussing the band’s origins, and his own origin of becoming a music fan, beginning with getting a boom box CD player as a birthday gift in middle school. Despite the panel being named “the Vampire Weekend songbook”, the questions addressed broader ideas behind the band, their choices for approaching the release of music and how things have changed from when they started.

Upon the end of the interview, the audience cheered as the rest of the band came onstage. It was then, upon the introduction of each song, that Koenig shared more details behind the origins of the band’s songwriting. The first song they played was a cover of The Honeycombs “Have I The Right?”, which was a song they covered early in their career and that he stated was an influence on their sound. They then went into the famous “Cape Cod Kwassa Kwassa”, and the deeper soundtrack cut “Ottoman”.

The banter became less about the songs origins and more about the man’s chronology, as they then broke out “Cousins”, a ballad from Modern Vampires in the City that I didn’t catch the name of, and a surprise truncated, reggae-fied cover of Bob Dylan‘s “Jokerman” (they are still learning the lyrics). Every song came across clear and the band was energized. new guitarist Brian Jones plays a mean slide guitar, and the additional new band members filled out the group’s previously stripped down sound.

Wanting to keep their practice up, the group took requests, playing a hyper “Mansard Roof”, “I Think Ur a Contra” using a clavichord, and closed out the new with “White Sky”, and once again promised that we would hear more from them soon.

See a snippet of VW’s cover of “Jokerman” below!