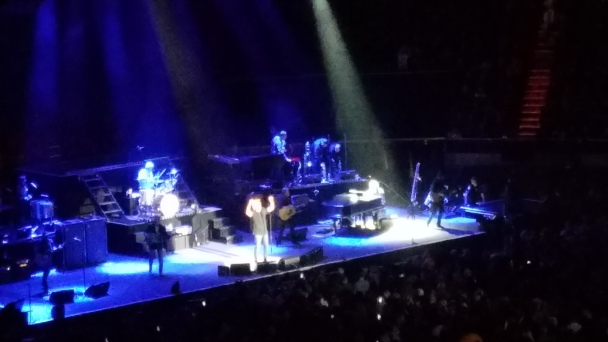 Since it’s remodeling, The Forum has become primarily a concert venue, and is constructed in a way that allows for great sound and a sense that you’re never too far away from the stage, even from the upper rows. For a band the size of the Silver Bullet Band, it was certainly the right location to fully capture the huge sound and multiple dimensions they cover.

Openers The Record Company were clearly disciples of Seger, and similar groups like Creedence Clearwater Revival, bringing hard blues rock riffs and southern swagger (despite the band having formed in Los Feliz) to the Forum. The group have had a couple AAA hits, though while their musicianship, attitude and passion were fantastic, the songs they played didn’t quite have the memorable choruses or hooks of their idols to elevate their set from fun to transcendent. As a relatively new and young band, I have full confidence that they will get there yet.

With the full knowledge that this is his “Farewell” tour, and potentially the last time he’ll be playing live in Los Angeles, the expectations were high for a crowd-pleasing setlist, and Seger proved throughout the night he knew exactly what to do to exceed the expectations. He came out to the blistering blues rock of “Shakedown”, and moved quickly into the mournful “Still the Same” before taking a moment to address the crowd. Throughout the evening, he would give brief snippets on when he wrote certain songs, and what inspiration led to their recording. It was just enough talk to keep the audience engaged while not keeping them waiting too long for the next song.

After a mellow acoustic version of “Mainstreet”, Seger hit his first highlight of the night with my personal favorite, “Old Time Rock n’ Roll”. There is nary a song out there that embodies everything I think of when I think of “rock n’ roll” more than this song, and the crowd obviously felt the same as they sang and rocked along. He followed it up with the ultra-catchy “The Fire Inside”, a smaller hit but no less a great number.

Seger returned to bluesier numbers, first with the cover of “Come to Poppa”, and then what he revealed was the most played song of 1980, “Her Strut”. He returned to his acoustic guitar, and recalled how he felt during his high school days as a 2-mile runner, and how the elated feeling following his races inspired the next song, “Like a Rock”. When thinking of this song, I’ve always associated with a truck commercial it once soundtracked, but there’s a tenderness and nostalgia within the lyrics that shone through in the live performance.

“Travelin’ Man” and “Beautiful Loser” somewhat blended together in the set, but things came back into focus with “Turn the Page”. Opening with Alto Reed’s iconic sax solo, which drew some of the biggest cheers of the night, the track was one of the few moments where Seger sat at the piano, and let the song of road weariness echo through the halls of The Forum. With the vibe brought down to a somber simmering, Seger took a moment to remember his friend Glenn Frey, the late Eagles guitarist who had recently passed. With a shoutout to the track’s composer, Bob Dylan, Seger began a moving cover of “Forever Young”, as a slideshow played in the background, paying tribute to a number of artists lost recently such as Prince, Chuck Berry, and photos of Seger with his friends Tom Petty and Frey. It was the most touching moment of the night, though equally close was the one-two punch of “In Your Time” and “Against the Wind”, played during the first encore. From here, Seger finished off the night with pure crowd pleasers – “Hollywood Nights”, and for the second encore, “Night Moves” and “Rock and Roll Never Forgets”.

Let’s hope music lovers over the next decade never forget Seger or the rock and roll he’s made. Next to Bruce Springsteen‘s E Street Band, the Silver Bullet Band is truly one of the best ensembles in rock, and Seger one of its most consistent and reliable singer/songwriters. Though he may be retiring from touring at the right time for himself, I hope that he continues to write songs or even work with younger artists to keep the sound and traditions he has built his career on the last fifty years alive and well.