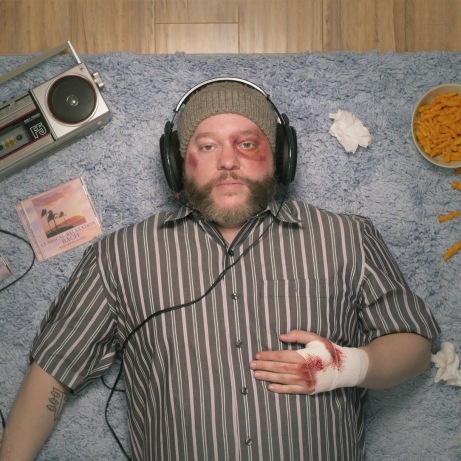 Ben Cooper, better known as Radical Face is on the mend. After finishing his acclaimed Family Tree series, releasing a series of covers of female pop hits (see our words on Lauper’s “The Goonies R’ Good Enough”) and releasing an open source album of instrumental tracks called Missing Film (2018) for moviemakers, Ben needed time to recover. The Family Tree series had begun as a pseudo-fantasy epic inspired by the magical realism of Gabriel Garcia Marquez and ended up being much more autobiographical than Ben had intended leaving him struggling with what the albums had wrought.

What was left was a man that needed some help and so he began seeing a therapist. Today’s release of Therapy is a result of his personal rebuilding process.

Ben Cooper was awesome enough to talk about this pain and healing from it, his new album, literary inspirations, and what’s next:

The Indy Review (IR): Your experience writing the Family Tree albums, the emotional and psychological toll the series had on you is a testament to the power of art.  To me, the project dripped in pathos and is deeply affecting.  You’ve said it didn’t go as expected and was a real trial for you. What was it like to realize something you’d envisioned as cathartic was in fact hurting you?

Ben Cooper (BC): I think it’s probably like most drugs, or bad relationships. It was gradual. Something turning from freeing to confining only works when it’s slow. And the hooks only sink in when it was something really wonderful to begin with, something you needed at the time. I don’t regret any of it. Now that it is no longer a constant in my life, I look back on it way more fondly than not. But again, I think that’s only because I am no longer inside of it. Perspective is really all the difference sometimes.

IR: This album is stripped down thematically with intimate portraits of a spiritual journey through heavy emotional trauma. On the other hand, the Family Tree images seemed to live on some dreamscape with rules determined by the world (song/album) they lived in. Can you talk about the difference in source material for the two projects?

BC: Yeah, sure. You are correct about the differences here. When I was making The Family Tree records, I was really into magical realism. Books like “One Hundred Years Of Solitude” were a big influence, and I wanted the freedom to explore the topic both in and out of reality. So I built a new framework of what was possible within this bloodline, and I kept to those “rules” throughout. But a lot of the material in those records is more personal than I ever let on. There’s a lot of truth in there, and I think the project went on so long because I had a lot to get off my chest. But the degree to which the personal lived on these albums always wavered. I could step in and out of characters at will.

Therapy is different in that it’s the first time I’ve ever written solely from my perspective. There are no characters or grand ideas. It’s entirely my perspective, which, to be totally honest, was really uncomfortable at first. But the past three years upended just about every aspect of my life as I knew it. I’ve moved 6 times in 3 years, and I’ve let go of just about everything I thought would happen in my life. And among it all, I started going to Therapy. I’ve been going weekly for over two years now. I count myself terribly lucky that I can afford to do that. It’s one of the best decisions I’ve ever made.

But I didn’t intend to write about this. The original title for this set of songs was “Verse/Chorus”. I just wanted to write some songs that used more typical formats, to see if I could really do that anymore. I’ve spent so many years writing songs driven by a narrative that I wanted to return to structure. But when it came for subject matter, the only consistent thoughts I had were about going to Therapy, and what I was learning from it. So I broke the 6 songs into larger topics: doubt, guilt, transitions, gratitude, acceptance, and goodbyes. And once I gave it a framework, I got over my discomfort of being the subject. I’ve always used music as some attempt to understand, as a kind of therapy. In writing on a topic, you have to choose your words carefully. Through that process of selection, you start to make some order out of the chaos — you give some difficult things language. It wasn’t terribly different than previous ideas once I got over that hump.

IR: “Dead Ends” is an amazing song.  The music and images weave together creating a tapestry of resolute retrospection.  Can you describe writing it and the music?  Where was the moment of inspiration/how did it evolve?

BC: Thank you. That’s the song that covers the topic of goodbyes. I think it’s almost impossible to observe something accurately while inside it. When I knew I was moving away and I wouldn’t be returning, something really interesting happened. For the first time, I could look back on the place I’m from and understand it a lot better. I could even understand my own arrogance of thinking I could fix things things that were beyond me.

When marrying that idea to music, I knew it would be nothing very loud. None of these subjects are something you scream to the rooftops, so nothing is sung very forcefully. And when combining music and content, I always try to find some underlying mood to filter all the decisions through. Since this was one of moving on but not knowing where, I figured the structure should break the concept of verses and choruses and imply that there’s a following chapter, hence the fade out at the end.

IR: Do you read much?  What do you read?  What books (if any) have impacted you?  Have you found influence in your songwriting from what you’ve read?

BC: Yeah, all the time. Books influence me more than other music, I think. I get more ideas from what I read than what I hear. And I swing between sci-fi, fantasy, classics, and non-fiction mostly.

The most recent book to really hit me was “Educated” by Tara Westover. I have never identified with a main character so much before. It’s non-fiction, covering her upbringing, and it’s the first time I’ve ever read so many thoughts that mirrored my own. I grew up in a very atypical family, and suddenly seeing so much of myself in media for the first time, in my mid-thirties, was something else.

IR: What are you doing for fun these days?

BC: As for fun, I like video games (I mostly play a PC game called Dota 2), books, movies, going on walks, and debating the merits of art with anyone willing to put up with those conversations. But nothing too complicated. I like to live pretty quietly.

IR: What’s next for you professionally? Shows? Tour?

BC: I’m already into my next full-length album. It’s called “Into The Woods”, and I’ve been shaping the concepts for months now, recording all the foundations. And I have some shows planned for later in the year, and early next year. I’m always involved in tons of side projects as well. I like always having something to work on.

IR: You’re on the west coast now.  What do you think now that you’ve been out here for some time?

BC: I have been really liking it! I was always a little bit of an odd duck where I’m from, so to suddenly be somewhere that no one notices you has been really great. And while there are always new things to adjust to, I am at a point in my life where I want something different. The adjustments are interesting and fun. So it has been a net positive.

About the album, Therapy has some lush arrangements showing strong influences from his experience writing the Missing Film album and his work doing covers. It is an easier listening Americana rock.

The words, as he said are so personal. Here are our impressions of the album in note form.

This EP brings us into a much closer interaction with Ben Cooper as a singer and songwriter.  He is offering a bare look at his psyche inviting his audience to see what makes him tick which will lead to so many of us nodding our heads and thinking, yeah, I’ve been there too.

Thanks to Caroline @ Clarion Call Media for putting us together and thanks especially to Ben Cooper for taking the time.