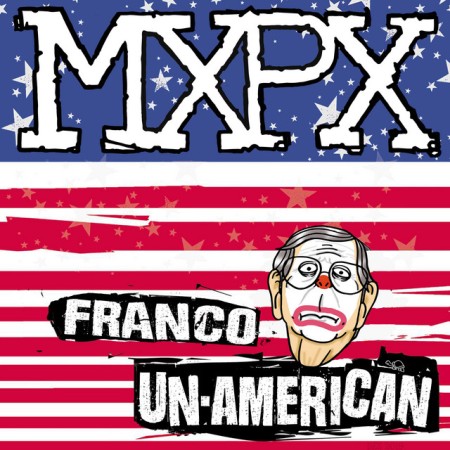 “Franco-Un-American” by NOFX was released on their political album War on Errorism in 2003. It discusses a personal political awakening where the issues of the day suddenly take on importance to the singer who has up to now “Never thought about the problems of this planet at all.”

Fat Mike calls out some of the contemporary concerns like awakening from reading Howard Zinn’s People’s History, movies by Michael Moore, global warming, and Fast Food Nation. It chugs along to the most poppy of punk. While many NOFX songs are political by nature, the pop of this song subverts the real concern for the country and the conservative turn that it was taking. It is a song to nod your head to and sing along to without really hearing what you are singing- dovetailing with the commentary inherent in the song itself

Today, MXPX has updated the lyrics to reflect our modern worries. They reference “global warming, billionaire cons,” a woman’s right to choose, Puerto Rico, treatment of children at the border, Veganism, Joe Rogan’s podcast, “Facebookization,” and “Neo-Nazis marching with their tiki torches.” The updated lyrics capture many aspects of the progressive zeitgeist and the absurdly catchy tune still lulls you into a sense of pop-punk security.

Not known for the political voice, long time pop-punkers MXPX are dipping their toes into the debate and hopefully, waking a few more people up to take a look around and avoid being another “I-don’t-care”-ican pushing society to be more idealistically American.