I’ve recently been reading A Man Called Destruction, a biography of the late, all-around musical eccentric Alex Chilton. While most know of the famed Memphis songwriter from his early career in the Box Tops and mid-career with the beloved but short-lived Big Star (and The Replacements‘ fantastic ode to him “Alex Chilton”), the book goes into depth not just about the character behind the talented but volatile singer, but also the man singles and side-projects he worked on over the years. 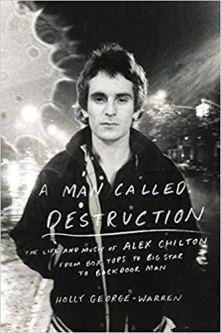 One that was mentioned in the book was time Alex spent co-writing/producing/singing on a two song single by The John Byrd Band called Earth Man Blues. The first thing to note: it’s questionable whether there actually was a “John Byrd Band”, as you won’t find any info on them outside of this single, and speculation on one website I viewed is that the group was just a secret side project of Chilton’s.

Either way, what the record provides us is an adequate A-side and the folksy, Big Star-esque b-side “Friend at a Very Good Time”. The track, recorded at Chilton’s usual stomping grounds of Ardent Studios in Memphis, finds Chilton’s voice in fine form, singing over jangly guitars and an easy-going beat. Lyrically, the track is more existential than one would expect, with Chilton musing “I’d love to feel that it’s all unreal, and I’d love to find my mind.” Add in a gorgeous guitar solo, and it adds up to a spacey trip for a summer day.