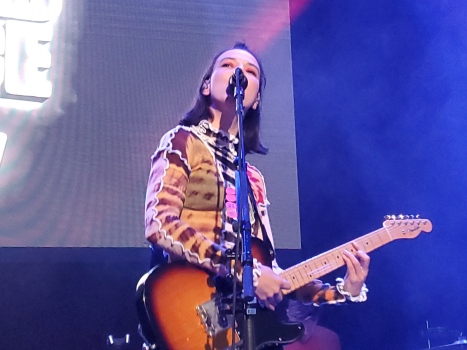 Artist: Of Monsters and Men

Last week, I was lucky enough to win passes to a private show by Icelandic folk rock group Of Monsters and Men, hosted by KROQ at their new HD Radio Soundspace venue. Opening with a brief interview by KROQ personality Nicole Alvarez, the best moment came when Alvarez asked them about what aspect of Americans they found the most surprising/annoying, and the answer was “how much we talked”, which summed up the band, who didn’t seem as comfortable answering questions as they did playing music.

The group opened with their most recent single (which KROQ has been smartly playing) “Alligator”, which garnered an enthusiastic response from fans. The track definitely leans more on the rock end for the band, who always were really on the peripheral of the folk revival that brought them to fame with Mumford & Sons and The Lumineers. The song sounded great live, with elements of classic U2 underlying the psychedelic lyrics (“I see colors raining down”).

Frontwoman Nannah has the cherubic presence that recalls her fellow Icelandic comrade in rock Bjork, and her aesthetic added an artistic flare to the group’s presence. Second song “Crystals”, a smaller hit in the U.S., is more of a slow-burner, with the build-up to the chorus more captivating than the anthem-light chorus. The sets next highlight was “Sleepwalker”, one of my other favorite tracks from their latest album Fever Dream. It’s gentle opening and harmonizing lead perfectly to the dreamy chorus, which continues the albums’ lyrical surreality, with more mentions of colors (“I still dream of indigo when you’re around”). It sounds like a track that would have been an adult contemporary hit in the late eighties, but still connects perfectly today.

The group introduced “Wars” as a dance song, and it certainly carries more rhythm than their normal catalogue, with a disco-y chorus and strong backbeat. After getting the audience moving with this, they went into their big single “Little Talks”, which was obviously the crowd favorite of the evening. The group ended their set with “Six Weeks”, a deeper cut from their debut album. I was surprised they didn’t choose “Mountain Sound” or “Dirty Paws”, both of which were hits in Los Angeles, but “Six Weeks” did end the set with some powerful sonics.

Check out the full setlist before, and listen to their latest album Fever Dream.