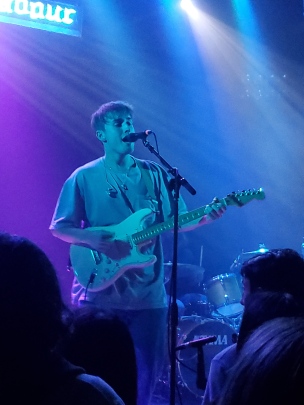 Wells is an endearing stage presence, taking her nervousness and mistakes in stride with a smile. Her delicate voice and songwriting brought Jewel to mind, but even her “sad girl” songs held notes of whimsy to them. Her acoustic cover of Smash Mouth‘s “All Star” was also a fun, unexpected surprise. Her album It’s So Nice is out now. 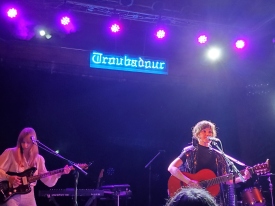 Fender came on with his full band (saxophonist included) and blasted into his set with “Millenial”. As one of the few rising alternative rock stars who has kept focus on guitar-based music, it was wonderful to see the venue packed to the gills with excited fans, many of whom were quite young. And thankfully, the guy is the real deal. He got the LA club moving with “Will We Talk?”, and kept the melodic train of rockers going with “The Borders” and the haunting “Dead Boys”.

When an audience member announced she was from the same hometown as Fender in England, they began a brief dialogue, with Fender amazed at finding not just her, but a number of folks in the audience who he had connections to (even one girl he went to school with). His youth and amazement at his current place in the world felt authentic, as did his nervousness at stage banter. His musical performances showed no sign of nerves though, as he did perfect-sounding takes on hit singles “Playing God” and the bombastic “Hypersonic Missiles”. I would say he could have even let himself cut loose a bit more on the latter, which as he becomes a more seasoned stage performer, he’ll hopefully learn to do.

When the band left, Fender took on a few quieter numbers solo. “Leave Fast” had a tender, ballad-like quality that recalled Jeff Buckley, while “White Privilege” sounded good though was sung a bit too low. It’s a powerful song, and would have been nice to really hear him put a little more energy and emphasis on the lyrics to make the statement shine through. And after a few protests, he even gave in and did a superb version of Bruce Springsteen‘s “Dancing in the Dark”. He then brought out the rest of the band to jam through “That Sound”, one of his hardest rockers. It was a smart energetic blast to close-out his set with.

Rock isn’t making the big comeback its fans are hoping for anytime soon, but with artists like Sam Fender carrying the torch, it surely isn’t anywhere close to dead.

Check out his debut album below, and be sure to catch him if he’s coming to your town: