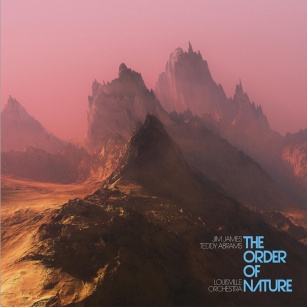 Rock and classical music have met before, but rarely with such inspired and breathtaking results. The Order of Nature finds Jim James (of My Morning Jacket) bringing his folk/rock/soul vocals to incredible arrangements from conductor Teddy Abrams and the Louisville Orchestra, and the music they have created, both original and fresh takes on classic material, is a compelling meeting of the two worlds.

Opener “Walking in the Snow” has a light, airy, magical tone that could fit it into Danny Elfman‘s Edward Scissorhands score, but finds a soulful warmth as James and the backing vocals come in. An ode to unity and love (“our failure to love every sister and brother…hate has nowhere to grow”), the song is the first of many tracks on the album that lyrically touch on weightier ideals, and find the powerful musical accompaniment to accommodate them. “Here in Spirit” could possibly have been a protest song from Sam Cooke in the 60’s, with enchanting and engrossing instrumentation carrying the weighty gravitas of James’ vocals. There’s a strength to the song, almost a confrontational approach to how James’ tackles it which elevates it further.

The songs on The Order of Nature flow seamlessly together, though they capture various eras and styles of music. There are certainly elements of classic pop and lounge standards here, with tracks like “The Human Touch” and “Back to the End of the World” bringing to mind the music of Frank Sinatra and old Hollywood musical soundtracks. But then there’s “In Demand”, that vaults to epic and urgent heights, like The Who‘s grandest, operatic rock tracks, with lyrics that address the universal state of anxiety permeating our society “I see blood on my phone. World spinning out of my control. I see fear in us all. Don’t need to feel it anymore.”

If you were only to listen to the opening of “Who Am I”, you might think you were attending a ballet, as the classical piano and strings prance and flitter in delightful ways, before James enters. That we can go from this to “Over and Over”, which musically takes inspiration from 50’s doo-wop and delivers socio-political lyrics like “we drop the same bombs, put up the same walls” may sound crazy, but somehow Abrams and the Orchestra manage to find cohesion through these sweeping changes.

By the time you reach the dramatic, epic ending of “Same Old Lie”, you will be yearning to listen again to this unique collaboration to fully absorb the experience. While some of the classical elements may come across as too twee for certain listeners, James’ always balances the delicate with the heavy, and helps guide listeners through Abrams’ musical landscape.