The classic El Rey Theater hosted a night of classic, body-shaking rock ‘n roll last Tuesday night, and The Indy Review was there to take it in. 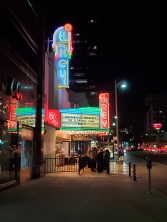 Opening locals The Matchstick Skeletons had the air of an 80’s metal band, and blasted out a number of heavy-riffed head bangers. While there were definitely a couple melodic gems in the middle of their set, the opening and closing tracks were more “kick up a ruckus” electric blues thrashing. The band members individually seemed to be having a good time rocking out for their hometown audience, though they didn’t exude the unbridled joy that next band Des Rocs showed off in spades. 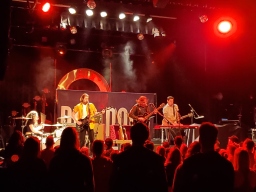 The New York group Des Rocs played as if they were the headliners, and it was 100% to their benefit. The trio’s live set was a perfectly polished and exuberant collection of hard-hitting, rockabilly-tinged music that clearly had the crowd engaged. Highlights like “Give Me the Night” mixed ravenous energy with ear worm hooks, and the group were able to show-off their musicianship and passion for what they do in ways that felt wholly organic and un-forced. During one extended jam, the lead singer played his guitar from behind his back, and later jumped onto the drum st and held up the cymbals to give the drummer a moving target. Simply put – the show was fun, and made it clear that these guys are ready to be playing arenas.

The Glorious Sons opened their set with only lead singer Brett Emmons onstage, playing the acoustic track “One Church Town”, with the rest of the band joining during the last third of the song to crank up the volume and end it in a huge way. The group then blasted into their #1 single “S.O.S.”, which elicited a full-room sing-along and had audience members shaking their hips. The Canadian rockers have managed to find that perfect blend between muscle and melody in their songwriting, making them one of the rarer traditional rock n’ roll groups that can attract hard rock and alternative fans.

Set highlight (and one of our Top Ten Songs of 2019) “The Ongoing Speculation Into the Death of Rock and Roll” overflowed with spirited rebellion and made it impossible to sit still. The heavy classic rock and southern rock influences on the band were evident throughout the set, coming out most strongly in songs like “Union” or the extremely catch “Kingdom in My Heart”. Another one that ringed out with the kind of romantic storytelling that Jagger and Richards mastered was “Josie”, from the group’s 2017 album Young Beauties and Fools. 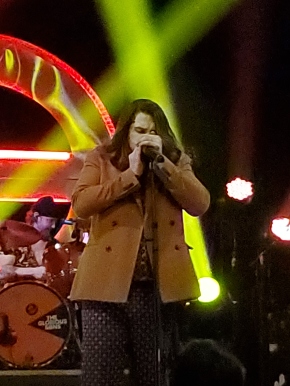 The power and song craft of The Glorious Sons is unmistakable, but what came through most in their set was the long-missing element of danger that rock music used to have. Emmons stalked, twirled and thrashed onstage like a force of chaos, and reminded me of the late comedian Sam Kinison in his grungy, prowling presence. The danger even became real at one point, when during one of his frenetic moments, Emmons threw a piece of the mic stand he was holding on the floor and it accidentally ricocheted out into the crowd, hitting a fan in the head (Emmons has sent his apologies and regrets about this out on Twitter). Thankfully the fan was able to brush it off after five minutes of nursing the wound and return to enjoying the show.

At times there was a hostility in Emmons towards the crowd, and I couldn’t tell if it was part of the stage show, or if the crowds’ at times low-energy response to the songs created some bad vibes for the band. It’s sadly a known constant that Los Angeles audiences can act “too cool for school”, but thankfully the group didn’t seem phased enough to stop them from coming out for an encore, including current single “Closer to the Sky”.

Overall, The Glorious Sons proved they could bring their excellent songs to life with thrilling results. Check out the bands’ most recent releases below.