Everyone knows who Arcade Fire is by now (after their Grammy win some years back, a hashtag of #whoisArcadeFire helped educate those who were irked by Kanye’s loss). They have released a number of critically acclaimed albums, earning a few gold records and famous fans (like the late David Bowie). They’ve toured the world and have headlined Coachella. They are ambitious, talented musicians who helped bring indie rock back into the mainstream.

And now I think they need to stop.

Everything Now is a mess. The title track and first single, “Everything Now”, sounds like AF covering ABBA, and tossing in a Rusted Root pan-flute sample for worldliness. It’s a trifle, and too cheesy for its own good.

“Signs of Life” opens with military handclaps, 80’s synths and a muted funk bass, with speak-sing lyrics about “cool kids stuck in the past”. I think those kids are AF’s old fans, who like me are not enjoying the band’s new interest in “dance music”. The song is cold and dreary, much like the industries the band mocked in their (admittedly amusing) marketing campaign for this new album.

“Creature Comforts” is an equally mechanical-sounding number, though there’s at least a bit more warmth to the guitars and an anthemic build to the chorus. “Assisted suicide, she tells me she’s dreaming of dying all the time” and other verses about girls and boys hating themselves show signs that Win Butler hasn’t given up on writing more intimate songs, but there just seems to be a disconnect in the musical delivery.

“Peter Pan” has a cute kitschiness to it, with it’s reggae rhythm and pretty harmonics, but the reggae vibe doesn’t work as well on “Chemistry” with its Dylan-esque lyrics and background chanting. The dirty distorted guitars add an unnecessary heaviness to the chorus. “Infinite Content” is a speedy punk burst that is one of the strongest jolts on the record, until it transforms into “Infinite_Content”, a silly country sing-along that has some pretty acoustic guitars but is a clear sign the band is more interested in being provocative than writing well-crafted songs.

I simply did not enjoy “Electric Blue”, but must admit a bias as I have never enjoyed the songs Regine sings on AF’s records. The high-pitched, heavily digitized vocals annoy me to no end. “Good God Damn” is lilting blues track with weak vocal delivery that never achieves the cathartic peak it reaches for. “Put Your Money on Me” is another cold, synth-laden number that feels like something that would accompany a parody of an 80’s crime thriller. It’s a plea for a lover to keep faith with the singer, but the track comes off as detached instead of sincere.

Everything Now‘s best track is “We Don’t Deserve Love”. It begins as a slow, melancholy country fuzz ballad with a man pining over his failing relationship and life choices, and evolves into a bright chamber pop hymn as the singer’s lover considers that they “don’t deserve love” due to all of the wreckage they’ve created. It’s the one moment of true humanity on the record, which too often gets lost on cultural criticism squeezed into experimental attempts at furthering the band’s sound, which was expansive and interesting enough to begin with.

Arcade Fire needs to stop, just until they can figure out what kind of songwriters they want to be. Too many of the songs on Everything Now sound like creative exercises as opposed to fully-fleshed out numbers that allow the band’s talents to comfortably coalesce with their ambitions. 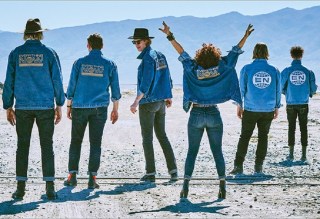