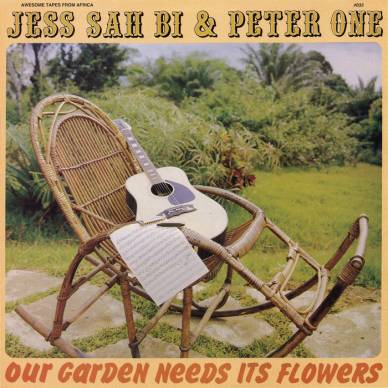 Our Garden Needs Its Flowers is an album written and recorded in 1985 by two artists from Africa’s Ivory Coast, paying homage to 1970’s country and folk, with songs sung in Gouro, English and French. And it’s beautiful.

Re-released for the first time, Jess Sah Bi and Peter One‘s previously out-of-print masterpiece is the soundtrack to an island vacation, a peace summit and a western sunset wrapped into one. The singers were popular in their native Côte d’Ivoire, and throughout West Africa, but the release of this debut album made them stars, playing to stadium-sized audiences, and performing on television and radio.

Songs like “Clipo Clipo” drift along like a gentle breeze, with lush acoustic guitars and intricate Djembe, while “Katin” adds in harmonica and backing harmonies, making the track extra cheerful. “Minmanle?” has a beautiful melancholy to its gentle melody, while the country shuffle of the title track sounds like a dreamy old cowboy song.

The overall effect is an album you can’t help but feel good listening to. Throw it on and drift a way for a while.