Take one of the best 90’s alternative bands, and have them play in Los Angeles’ greatest venue, and a fantastic show is bound to happen. The Gin Blossoms, touring behind their new album Mixed Realities, played a sold out show on Monday night, and it was a general crowd-pleaser for everyone in attendance.

Opening the show was Big Mother Gig. Formed in Milwaukee in 1992, the power pop group returned last year after a 20 year hiatus with a new 6 song EP, and have a new full-length album due October 12th. Based on the new songs they played, that new LP became one to watch out for. The group’s sound is similar to Superchunk, or a slightly crunchier Tommy Keene – their songs brimmed with strong hooks and energy (though it would have been nice to see the bassist and guitarist show some of the same enthusiasm on stage as the lead singer). Current single “Nametag” has proven to be a college rock hit, garnering nearly half a million streams, and worked as an engaging set opener. Another highlight was “Just Fly By”, which proved to be an ear-worm worthy rocker. The group definitely left a good impression and warmed the audience up for the Gins.

The Gin Blossoms hit the stage and went quickly into “Lost”, a catchy non-single from their early days.  They followed it with “Long Time” off their 2007 comeback album Major Lodge Victory. If I had one big complaint about the night, it is that they didn’t play more songs from that excellent record, as “Learning the Hard Way ” and “Supergirl” are some personal favorite Gin tunes. But, as they went into the the heartbreaking “Until I Fall Away”, I was already won over for the evening.

As should come as no surprised, the band played a chunk of songs from their new album. While old time fans are generally at these shows to hear the hits, it should be said that a number of these new tunes played great live, with “Still Some Room In Heaven” leading to a good number of hands in the air, and single “Break” proving to be an effective, inspiring ballad. Once the Gins had gone through these tracks, the hit parade began.

“As Long As It Matters”, “Allison Road”, “Found Out About You”, “Till I hear It From You”, and “Hey Jealousy” all came in quick succession, filling the room with the warmth and nostalgia these excellent songs spark. Audience members were dancing and singing along as if it were 1992 all over again.

Lead singer Robin Wilson’s voice has remained impeccable throughout the years, as smooth and gorgeous as it sounded in the 90s’. While his stage interactions with the audience consisted of normal rock and roll moves (cajoling hand clapping and arm waving, standing on monitors), there were a few perfect Gin touches, such as handing out tambourines to some of the front row audience members to jangle along with the group. The rest of the band was all-around solid, with guitarist Jesse Venezuela and Scott Johnson careening on some beautiful solos and Bill Leen holding down a steady rhythm.

For the encore, the Gins began with a cover of The Rolling Stones “Wild Horses”, which fit perfectly with Wilson’s vocals and the band’s vibe. While I had hoped they would go into “Learning the Hard Way” next, they instead played one of their best songs, “Follow You Down”, which worked the audience into a fervor. By the time that was over, I was ready for the group to call it a night, but they added in one more song – a cover of Tom Petty‘s “Anything”. I will say I don’t think this was the best choice of Petty songs for them – it’s a less-memorable rocker that doesn’t take advantage of the Gin Blossoms‘ melodic strengths.

Despite this odd closer, the perfect performance from the band and the strong setlist made the show a great evening experience, and continues to prove the band’s relevancy in the current music scene. 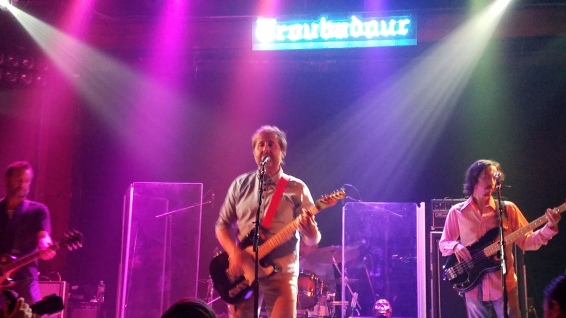