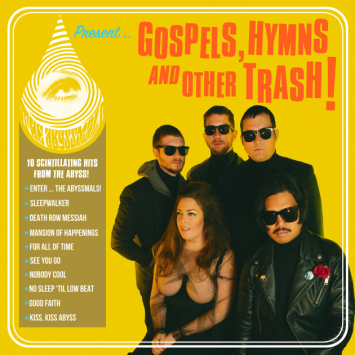 Retro rock and roll sounds have never really gone away, but the genre feels like it’s making a minor comeback, and NY band The Abyssmals could easily become the poster kids for the revival. Their new album Gospels, Hymns and Other Trash! contains re-recordings of songs from their previous self-titled record, as well as a handful of new tracks. And as one can guess based on the album title, the group want to show off the range of their musical palette, and do so with healthy success.

Their music conjures up the soundtracks to 60’s cult films, biker gangs, hot rods and dive bars. Opening track “Enter…The Abyssmals” throws a wave of surf guitar and beach vibes at your ears, before mellowing for the outlaw country rock of “Sleepwalker”. With its lo-fi vocals and street attitude, it’s what The Who would possibly have sounded like if recording on Molly, complete with the “who are you” lyrics.

Album highlight “Death Row Messiah” is a dirtier beast, taking a Beatles-esque melody and twisting it with a barroom stomp and danceable groove. Thing get trippier on “Mansion of Happenings”, a psychedelic cut with drifting melodies and hymnal vocals that lift and linger, until getting obliterated by a soul-soothing guitar solo.

The Abyssmals are young enough to still get away with wearing their influences on their sleeve, whether it’s Pink Floyd on the haunting “For All of Time” (with it’s nail-on-the-head shout out lyrics “I’ll follow you to the dark side of the moon”), or the New York Dolls on the scuzz-punk head banger “See You Go”.  One can even hear a little Velvet Underground on the anthemic guitar harmonics of “Nobody Cool”.

Overall, the album stays musically cohesive despite the grab-bag of influences. And aside from the sleepy ender, “Kiss, Kiss The Abyss”, each individual track packs in enough rock n’ roll spirit to keep the energy up and the vibe alive. This is definitely an album for cloudy beach days or whiskey-fueled nights, so be sure to put it on in the right environment or else your ears may just fuzz it out.