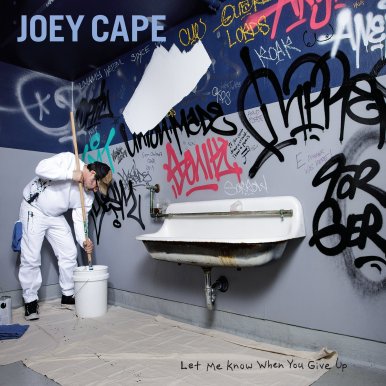 Lead singer of the great punk band Lagwagon, Joey Cape, has just released his 5th solo album Let Me Know When You Give Up, a reflective collection of American rock with a punk underbelly. It’s an album ruminating on what’s been done and what’s to come, and it showcase’s Cape’s songwriting skill. 30 years into his career and he still has something interesting to say.

Lagwagon distinguished itself in part through Cape’s ability to tap into their audience’s feelings and perspectives capturing the essence of being young, frustrated, and usually in love so now it’s welcome to hear him still understanding what his thirty to fifty something peers are going through. On “Andalusia,” over a simple acoustic melody he sings ““Nowhere to run, nowhere to hide” / Words we have heard too many times / it’s all cliché to one your age / something new comes, something old stays / someone is lost in an embrace / it’s fictional this golden cage / I’m bound to run.” But he knows this pure liberty isn’t possible describing his freedom “figuratively” and he tries to understand the reasoning behind how we convince ourselves to stay. The music here is good as well with flat, punk sounding back up singing filling out the chorus. On “Fall Down,” he drops the classic rock pretenses of earlier songs and writes a tight little punk tune embracing the memories which mingle pain and joy- the sweet sting of nostalgia at 50.

In total, the album isn’t great. There are a few underwhelming songs that lack a distinguishing character but there are a number of highlights that will get a lot of play in the next few months.

The new album is out now so check it out and when you hear his voice see if you won’t find your self searching for “May 16th“.