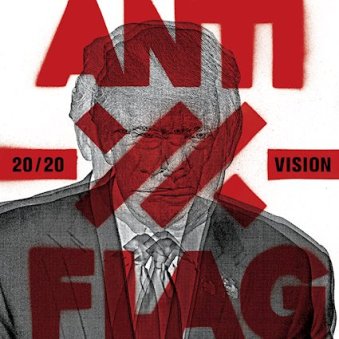 Anti-Flag‘s brand of firebrand, politically aware punk rock could not be more relevant nor necessary than it is right now, and the troubling modern times are fueling them with plenty of songwriting material. While in the past they have avoided directly addressing specific Presidents, for this album, as bassist Chris #2 puts it, they decided “fuck that, we need to be on the record in opposition to the policies of Donald Trump and Mike Pence.”

To make sure there’s no cloudiness about this, the album opens with one of Trump’s more infamous quotes, giving light praise to past dictators who cracked down on protestors. This clip leads right into the chugging guitars and furious gang chorus of “Hate Conquers All”. One of the harsher tracks on the album, but it tonally matches the track’s message, as it “seeks to dissect the lexicon we use around racism to hold ourselves more accountable”, according to the band. The tracks lyrics are made up more of impactful statements than thoughtful analysis, getting deepest with lines like “The same masters who made us their fucking slaves are now our saviors. I’m so sick of needing to be saved”.

The anger is prominent on 2020 Vision, but thankfully the album is not lacking in driving melodic bangers, such as “It Went Off Like a Bomb”, a dark vision of a military state, complete with sick guitar solo, or the perfect singalong “Don’t Let the Bastards Get…”, a hip-shaking country punk number that will raise your spirit. Single “Unbreakable” follows similar lyrical territory about staying strong in the face of adversity, and packs a bouncy riff that makes it a solid fist-pumping anthem.

There’s no subtly in “Christian Nationalist”, but none is needed in this catchy, vicious screed against the dangerous and hypocritical groups who have been helping to push fascist agenda. On the whole, the messages in the band’s songs are on-the-nose, focusing more on couplets that don’t require much dissection. This serves a purpose – it’s far easier to rouse a crowd and get a message across with quick and catchy lines than deep, metaphorical poetry, though it would be good to hear some more introspection like the band does on the title track, where they recognize how the tactics they and their peers have used to push their causes have been co-opted by the other side (“Now there’s a silence on the radio, now there’s a hole right through our hearts….or do we just keep repeating all the things that the loathsome did”). 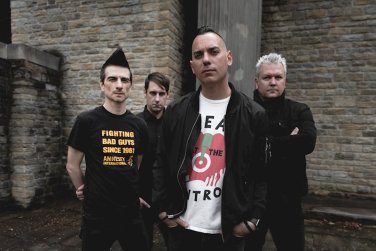 The album closes with a strong one-two punch of “Un-American” and “Resistance Frequencies”. The former is a subdued acoustic track, that gains power from its restraint, as it excoriates the politicians whose lies to their constituents have real human consequences. “Resistance Frequencies” brings in horns for a ska-lite romp where than band sound like they may be having, dare I say it, fun. One could imagine Justin Sane actually smiling while singing it, and the energy from this is prominent.

Anti-Flag are not a band you listen to while brooding in your room, fuming over the latest insult to our Democracy that Trump has perpetrated. They’re the band to kick your ass into gear and get you out to a rally or protest. If you need a soundtrack to taking action to fight for a better world, throw on 2020 Vision.

The album drops January 17th. Take a listen to the first released tracks below: