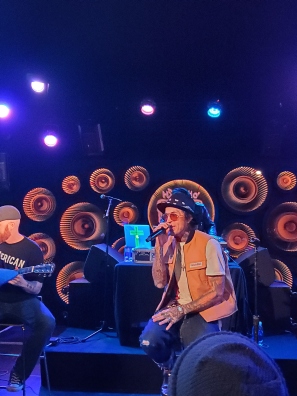 KROQ continues to reward their listeners with their fantastic series of intimate HD Radio Soundspace shows, and last Thursday, they brought in rapper Yelawolf to perform. As per usual, the show began with an interview between Nicole Alvarez and Yelawolf, diving into his musical roots, who he’s learned the most from in the music world, and what artist he’d like to collaborate with (Kris Kristofferson!).

Yelawolf began his set with a collection of bangers, including “Catfish Billy”, “Pop the Trunk” and “Box Chevy 7”. Yelawolf has an undeniably addictive flow to his delivery, with the addition of his southern twang giving extra character to his rhymes. Backed only by his DJ and an acoustic guitar, the songs still had his fans in the room hollering (though it didn’t take much to get them hollering throughout the whole set and interview).

For the second half of the performance, Yelawolf graced us with the first-ever live performance of “Lighting” from his latest album Ghetto Cowboy. The song is a more melodic gem, that had Wolf going between rapping and singing. He then went into current KROQ single “Opie Taylor”, a mixture of rap and outlaw country that got a boost from LeBron James’ bumping it in an Instagram story. Wolf was clearly enjoying the performing the chill-vibed song, as was the rest of the audience. 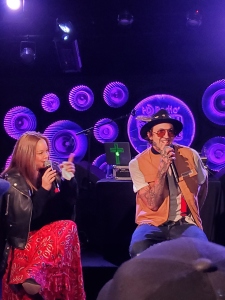 Breaking from the normal format of these shows, Wolf then took a moment to personally take audience questions (most of which were shouted out chaotically, but to his credit, Wolf took it all in stride). Addressing how he got involved in the film Peanut Butter Falcon, his classic rock homage album Stereo, and at times just shooting the shit with the fans, it was a great down-to-earth moment that gave a chance for the artist to share how grateful he was to his fan base. This thankful moment was the perfect way to transition into his final track of the night, “You and Me”, one of the closest things Yelawolf has to a ballad and another highlight from his most recent album.

Even with the show over, Yelawolf took a full-audience photo with everyone and then continued to stay in the room to sign posters, hats and whatever else the fans pushed at him. I certainly left with more respect for Yelawolf as a person and performer after the show.

Check out a video clip from the performance below, and stream Yelawolf‘s latest album Ghetto Cowboy at the bottom of the page.