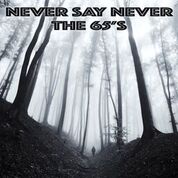 New Jersey continues to prove itself to be an excellent breeding ground for punk rock. Having already spawned bands such as the Bouncing Souls, Gaslight Anthem, Thursday and Midtown, the legacy continues to live on with The 65’s. The group are no spring chickens – they’ve been battling away since 2009, and released their debut record Strike Hard! in 2011. Since then, the group has been releasing a steady stream of EPs and singles, with their new EP, Never Say Never, dropping on February 28th.

The EP’s propulsive title track is the perfect mix of energetic musicianship, muscular melody and bandaged heart. Reminiscent of Face to Face at their best, the song will have fans in the pit moshing extra-hard to hide the tears as they chant along “I’m in too deep now” with Joe Pugsley.

Second track “Broken Nose, Busted Knee” has an equally anthemic quality to it, with the guitars thundering down, and a noodley solo slicing itself into the chunky rhythms. Lyrically, the songs seems to be addressing someone who is letting fear and paranoia control their life, and making everyone else miserable around them, “So many questions, you’re drowning in your fear. We got so many answers, you just go on and on and on and on.”

Third and final track “Waiting Here so Long” is heavier on the vocal side, giving the song an angrier vibe while not undermining the power and emotion of the track. As a complete package, the EP shows off the group’s strong hooks and punk rock bonafides, through it would have been good to hear another song here that expanded the group’s range (even a more mid-tempo number could have stood out and allowed a little breathing room between guitar attacks).

If you’re a fan of The Replacements, Face to Face, The Gaslight Anthem, or any other punk groups that sound like they chase their whiskey with more whiskey, then The 65’s should be on your radar. Check out the title track below, and find it in our Stream to a Million playlist.