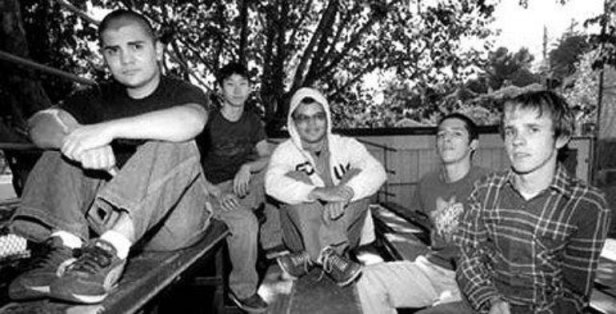 Ages ago in my college days, one of the yearly events I looked forward to most was when the Fiji frat house hosted their Fiji Islander concert. Every year they managed to bring in one to two solid bands of the punk/ska variety, and the shows were always a blast (minus the time I got kicked in the face by a falling crowd surfer during Face to Face‘s set).

In 2003, Sugarcult were headlining the Islander, and Locale A.M. were opening for them. I had never heard of the group prior to the show, but they easily won me and the rest of the crowd over with their melodic, high-energy blend of pop punk and alternative rock. The group, in their current line-up, had released two EPs, The Characters and Breaking the Fourth Wall, and had some new songs on their belts, including “Dead Man Dyin'”.

And what a great song that was. Super catchy, sugar-rush verses hit like a syringe full of adrenaline, while the chorus is made for jumping and arm waving. The track also hit an emotional note with my college self, as lyrics like “We all chase the one who makes us feel pathetic, so pathetic. I apologize, but I have to let you go…cause you’ve been treating me so low” we’re instantly relatable to me.

Sadly, this song, along with a few others, would never get a proper release, as the group called it quits at the end of the year. They released “Dead Man Dyin'” for free online, so the mp3s are out there, and made their way to Youtube, but the group doesn’t have any of their EPs or songs on streaming platforms in any official capacity. Lead singer Eric Frederic and Rene Carranza (turntables, percussion) would go on to form the band Facing New York with members of the band Tragedy Andy. The group has a number of albums up, and Frederic has also made a huge side career as a multi-platinum, Grammy-nominated producer/songwriter/artist Ricky Reed).

From humble beginnings. Check out the excellent “Dead Man Dyin'” below!