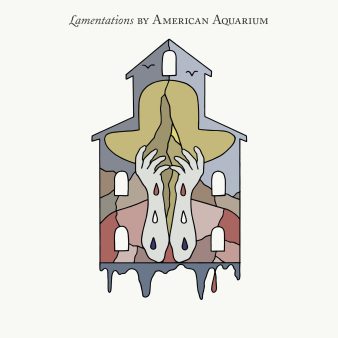 On Lamentations, American Aquarium‘s BJ Barham slides between hard, honest looks at the South he knows so well, and stories filled with wit, empathy and regret, forming a thoughtful and thought-provoking collection of songs. Mining soulful depths, Barham lyrics shine throughout the album, with the band providing the emotional soundtrack to the various tales within.

The opening salvo to this opus is “Me + Mine (Lamentations)”. A stripped down acoustic lament for the life so many people live in this country, Barham touches on everything from family farms being shut down, opioid addiction and being fed lies from politicians on both sides. Yet, there’s a rousing message of strength in the track as well (“Me and mine, we aren’t the kind to lay around idle and complain”), paying homage to the resilience of the people Barham is singing for. As the full band launches into a dramatic coda, it’s impossible not to be enthralled and excited for what’s to come.

Even more direct is “A Better South”, where Barham is pulled between his Souther pride and his acknowledgement of the issues that still persist and paint his home as a backwards, racists part of the country. Keeping the jaunty track from become a vicious screed is Barham’s optimistic hope; “They say sing your song boy, shut your mouth. But I believe in a better South.”

The personal stories here are often as heartbreaking as the world Barham describes in the opening track. “Six Years Come September” overflows with regret, as a former alcoholic laments how is stubbornness and pride led to a drunk driving accident that took the life of his wife and unborn child. Then there’s “The Day I Learned to Lie to You”, a piano ballad with a little jazz flavoring where Barham admits “I know good and well I’m going straight to hell for all the things I put you through.”

One through-line in Barham’s storytelling is the self-awareness of the characters. The trucker in “Before the Dogwood Blooms” who is “running low on money…and the bills are coming due” so he takes jobs “cash up front, no questions asked”, knowing it can leave to trouble, but not having any other options. The driver has a positive outlook, taking troubles in stride with humor, even as he sees coming sirens in his rearview mirror. Then there’s the father getting divorced in “How Wicked I Was”, who knows how horrible he was to his ex, but for the love of his daughter begs her not to tell their girl about his past ways. The portraits painted in these songs are never one-dimensional; the characters are certainly flawed, but with layers and redemptive qualities that gives you hope.

Musically, the album says generally within familiar territory; rollicking country rock, acoustic folk, and a strong dose of classic rock inspiration. “The Luckier You Get” carries heavy Tom Petty vibes, and sounds like a successor to “Even the Losers”, and the closing perseverance anthem “The Long Haul” could have been a Billy Joel song, if Joel had grown up south of the Mason-Dixon Line. The musicality of the band is sharp and humble, beautifully scoring these cinematic tales, and only allowing themselves small but wonderful moments to grab attention. The latin drum rhythm on “Brightleaf + Burley” is a welcome change of pace halfway through the album, as is the saxophone on “The Day I Learned to Lie To You”. American Aquarium is pretty clearly Barham’s band, but he’s certainly found the perfect players to support him on record.

And it is a powerful record. Barham’s abilities as a storyteller just keep getting better by the album, and the songs feel arranged to take listeners on a journey, beginning with the macro view of southern history, and quickly zooming in on the archetypal lives of the people straining to get by, and then moving into Barham’s most personal songs.

The album drops May 1st, but you can listen to the pre-released songs below: