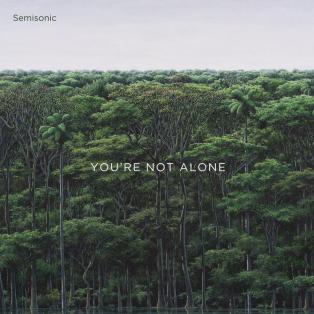 Not everyone knows the band Semisonic, but almost everyone knows their indelible hit “Closing Time”. It’s the song bars across the country play as the last song of the night. It remains a singalong staple of alt. rock radio decades after its release. It’s been more than two decades since Semisonic have released new music, as each member has gone on to have their own separate careers.

That all changes on September 18, when the group releases their first EP of new tunes in 22 years. You’re Not Alone is a pure throwback to 90’s alternative rock goodness across the EP’s five tracks, starting with the opening title track. “You’re Not Alone” is a mid-tempo rocker, filled with loud drums and guitars and a big old chorus. While lines like “No one ever told you life was long and believed it” are timeless, they also feel extremely prescient in these current uncertain times.

Opening as a piano ballad, “All it Would Take” builds into an inspiring anthem (“In a sense it’s paid in flames and dreams of change”). While there’s a little cheese to the lyrics (“Changing the world within me and around me”), the earnestness of Wilson’s vocals help ground the track.

EP highlight “Basement Tapes” brings a classic-alternative sound, with lyrics that invoke humor and nostalgia. Looking back at driving around in a van and playing shows, and fans thinking “we’re cool temporarily cause we’re from Minnesota”, the track excels with its tiny lyrical details and toe-tapping beat. And while they mention their “Big Star dreams” in this song, it’s “Don’t Make Up Your Mind” which shines as the bright power pop nugget here.

Closer “Lightning” is slower paced but has equally crunchy riffs, and sounds like it could be a lost track from the VARSITY BLUES soundtrack, with it’s chorus of “Am I asking for too much for lightning to strike me? Strike me a second time?”

You’re Not Alone is as upbeat and peppy as you would expect from a band of 90s rockers clearly writing music strictly for the love of it. It will take you back a few eras and will leave you in a good mood.

Listen to the first single and hear the entire EP on the 18th!