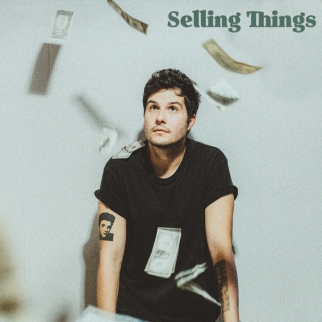 Singer-Songwriter Brian Dunne seamlessly melds the somber with the sardonic in his latest LP, Selling Things. This collection of mostly acoustic-driven tracks carry weighty subjects, ranging from the personal to the political, along through wistful melodies and sharp, humorous lyrics that Dunne pulls off with an effortless panache.

It’s not hear to pick out Dunne’s influences, as the writing is soaked with Springsteenian, working class rock, though in opener “Harlem River Drive”, the soft, lilting vocals and gently fingerpicked guitar conjure Dylanesque aspects, though the confessional chorus (“I never know babe, which way to go babe, I’m just trying to hold on along the way”) feel wholly his own. It’s a strong opener, though the vocals get drowned out during the bridge.

The Springsteen influences come on strong in “Walk Me Home”, with expansive chords and the curled lip vocal delivery sounding like something right out of the Boss’ playbook. The track aims for an arena sound, building up towards a muscular conclusion, with tambourines and backing vocals in tow. There’s a believable folksiness to Dunne’s street come-ons to the lover he’s addressing; “If you walk me home and let me ramble on, you might find a little comfort in the world I roam”. This folksiness serves Dunne well, allowing him to slip between serious and sarcastic lines without any discord.

Tracks like the driving “Nothing Matters Anymore”, written in the shadow of the 2016 election, surprises with a back-and-forth between characters (“I believe Mark Twain said that” “Is that right?” “Oh Yes I’m sure”), and a potshot at Trump (“Ah the truth is irrelevant. Just look at the President”). The rollicking music and fun vibe make this one a guaranteed future live singalong. Same can certainly be said for closing gem “Getting Wrecked on Election Day”, where Dunne manages to take the piss out of himself, while also dropping some reflective moments (“Time is fleeting and life is insane. One day we’re young and the next we ain’t”).

While Dunne can easily write a poignant, acoustic lament like the pretty “Chasing Down a Ghost”, these tracks don’t show off his songwriting skills as strongly as the tracks that tackle self-effacing subject matter with pathos. “I Hope I Can Make it to the Show” is a great example of this, as well as a song where he branches out musically. The track begins with spacious drums and sinewy guitar harmonics, with Dunne adding echoey effects to his vocals that add to the atmospheric production. Lyrically, it follows an insular guy wanting to create a connection with a performer he’s clearly into. “I never stood a chance, at being cool in any sense” is the universally relatable line that anchors the song, and is a perfect microcosm for why Dunne is such a relatable artist.

The music on Selling Things is unpretentious, filled with enjoyable colloquialisms that give Dunne a down-to-earth charm. Songs like the title track, which uses selling things on eBay as an allegory for not making time for what’s important in life, ring true because of his believable delivery. Sometimes breezy, other times brimming with passion, Dunne pushes his vocals in a wide array of directions that keeps the album from ever feeling sedentary.

The full album drops on April 10th, but you can listen to the tracks currently available below: